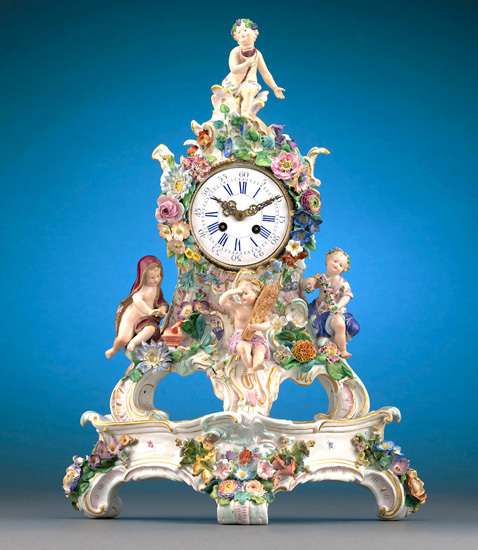 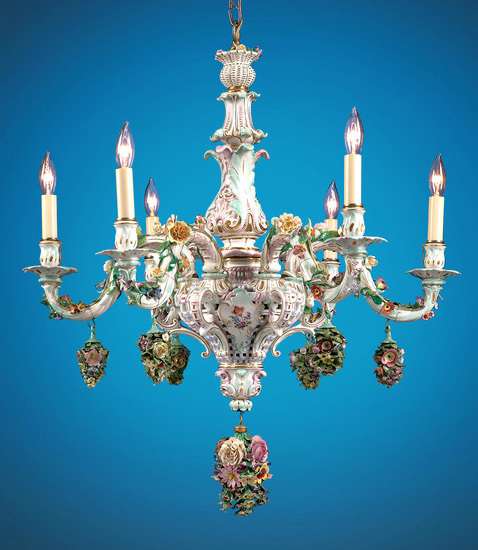 This ornate porcelain mantel pendulum clock showcases the company’s mastery of allegorical themes with its striking depiction of the Four Seasons. Winter is enveloped in a warm, fur-lined cloak; Autumn holds...

When porcelain began to be heavily imported from China in the 16th century, it quickly became one of the most highly coveted luxury goods throughout Europe. Beloved for its pure white hue, its translucency, and resilience, it held an exotic appeal for the European upper classes.

Naturally, European manufacturers soon set out to uncover the secrets of making porcelain themselves; the result was a flourishing of creative, scientific and commercial enterprises throughout Europe.

By the 18th century, European porcelain factories proliferated throughout the continent, and many enjoyed a royal or noble patronage. Firms developed a rich repertoire of painted wares to please their aristocratic patrons, from extensive dinner services to monumental vases and expressive figurines.

The Pursuit of Perfection: Masterpieces of European Porcelain showcases an outstanding sampling of some of the finest European porcelain creations, created by these famed firms at the height of their output. Join us as we explore the extraordinary creativity and technical virtuosity behind the art of porcelain.

Back to Home Page 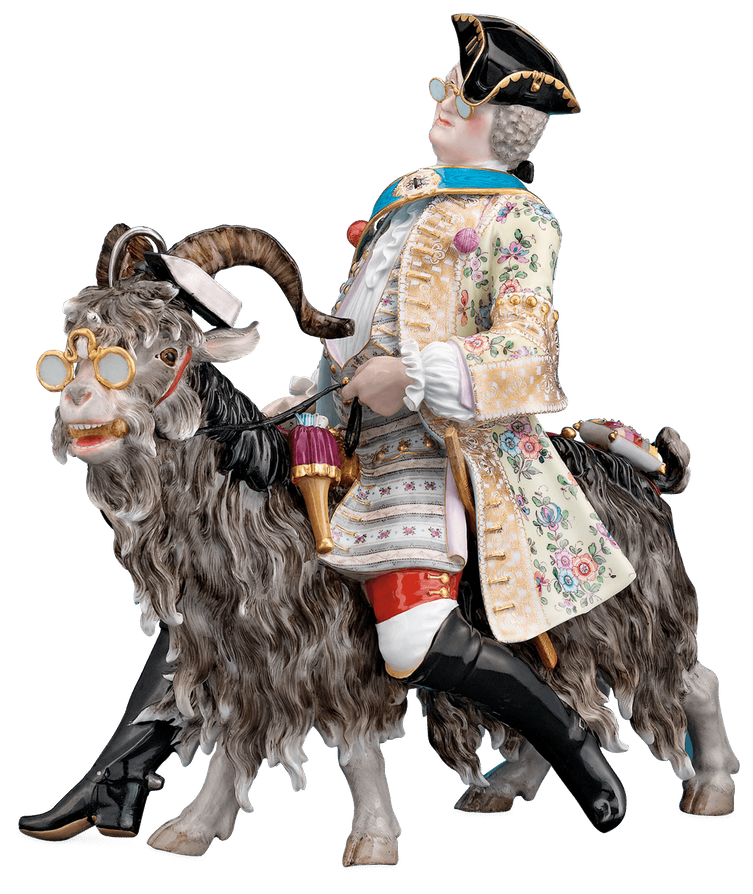 Founded in the early 18th century, the legendary Meissen factory was the first European manufacturer to produce hard-paste porcelain and remained unrivaled in terms of innovation and beauty for decades. In 1701, Augustus the Strong, the elector of Saxony, imprisoned the young alchemist Johann Friedrich Böttger in the town of Meissen; his mission, to discover the secret formula for hard-paste porcelain. In 1708, Böttger unlocked the mystery and found the key to both porcelain and his freedom. By 1720, the Meissen factory was producing wares that eclipsed even the finest Chinese porcelain.

Though the formula for hard-paste porcelain gradually found its way across Europe, the Royal manufactory at Meissen continues to this day to produce some of the finest porcelain works the world had ever seen.

Count Brühl’s Tailor on a Goat
German • Circa 1880

An artful blend of aesthetics and functionality, this Meissen chandelier pairs the outstanding quality of
traditional painted porcelain with modern electricity. The six-armed light exemplifies the Rococo... 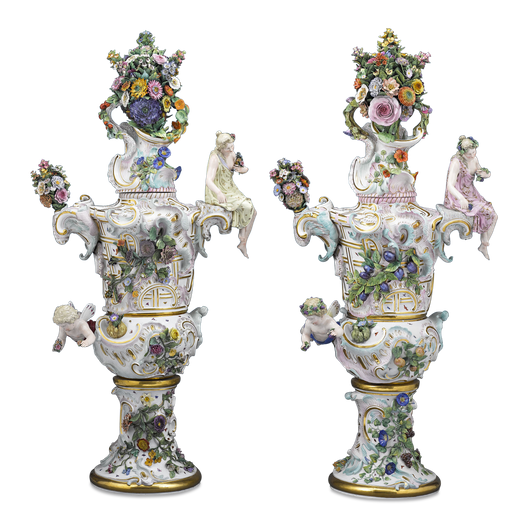 THE PORCELAIN PRISONER: THE MAKING OF MEISSEN HARD-PASTE PORCELAIN

Porcelain is not a word that immediately brings to mind tales of intrigue, imprisonment and retribution, but like any luxury good, its history is rife with such stories. Known as “white gold” in the 18th century, porcelain was once regarded as one of the most highly prized commodities in the world. Yet, while the secret to making hard-paste porcelain had long been held by Chinese makers, its recipe was highly sought after by European manufacturers. Read on to learn how one German porcelain maker - Meissen - discovered the secret.

The Porcelain of French Kings

The first French monarch to take a significant interest in porcelain was King Louis XV, whose mistress, Madame de Pompadour, adored the Rococo wares produced at a small French manufactory in Vincennes. The King became a shareholder of the flourishing enterprise in 1752, and, when an expansion was needed, he suggested a location proximal to Versailles and Paris. The town of Sèvres, on the banks of the Seine, proved to be the perfect location for the factory’s relocation, which occurred in 1756.

Having started as an attempt merely to imitate Meissen porcelain, by the late 18th-century Sèvres had developed its own distinctive style of decoration. Highly collected by both the crown and the French nobility, the beauty of Sèvres porcelain soon became a source of national pride. Royal and political patronage continued over successive decades into the 19th century and beyond, including Emperor Napoléon and King Charles X. 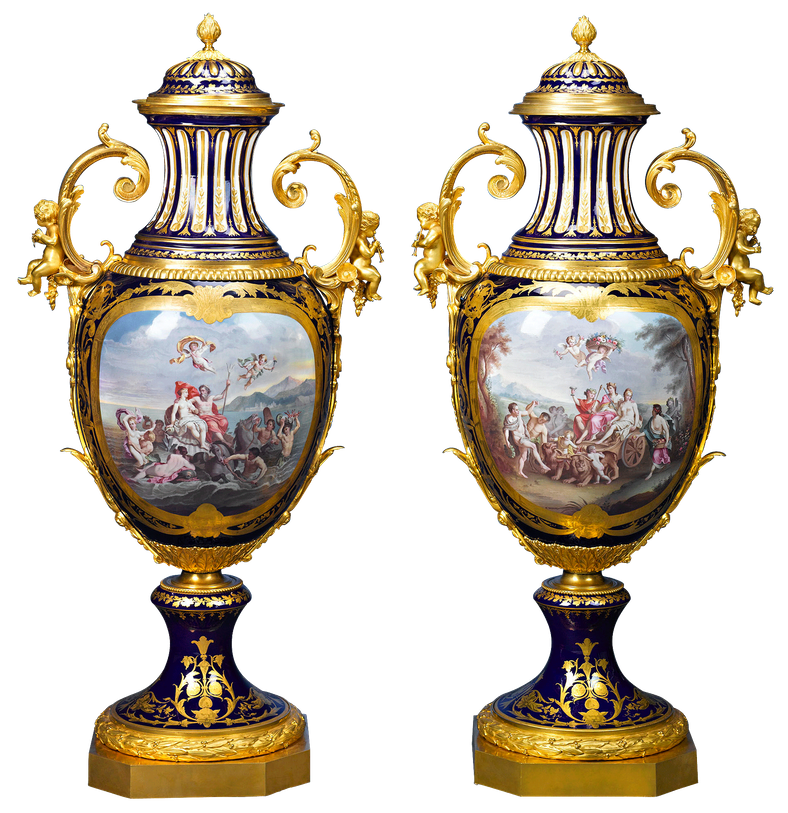 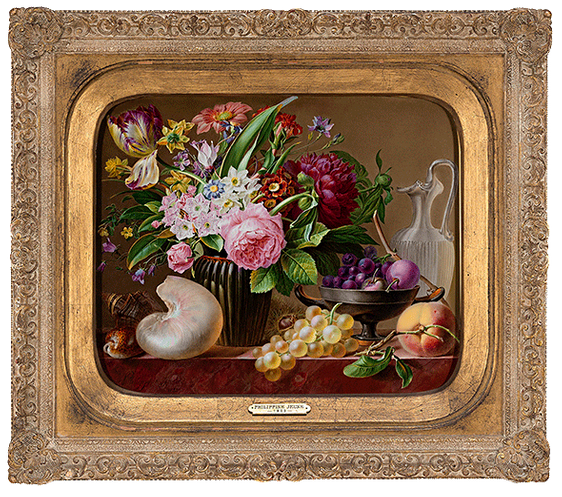 Long desired by monarchs, emperors, and collectors of influence, the porcelain of Sèvres reflects a timeless legacy of beauty and power. The origins of the factory were modest: it was founded in the 1740’s as a small workshop in Vincennes, France, established to rival major European porcelain producers like Meissen. Within less than two decades, however, the factory evolved into France’s National Manufactory, was acquired by the king, and was relocated to the town of Sèvres.

Prussian King Frederick the Great, a sovereign with a great taste for porcelain, purchased a small porcelain manufactory in 1763, and re-named it Königliche Porzellan-Manufaktur Berlin (Royal Porcelain Factory
Berlin), or KPM. From the company’s  founding in 1763 to the abdication of Emperor William II in 1918, KPM came to be owned by seven kings and emperors. KPM  porcelain made during this period thus reflects not only the fashions of the time, but also Prussian royal taste.

Customers such as the Duke of Kurland, various tsars in Russia, and even Frederick himself helped propel the KPM name all over Europe. KPM porcelain established itself on the foundation of excellent decorative techniques, high quality porcelain, and timeless designs – characteristics of the name that prevail into today. 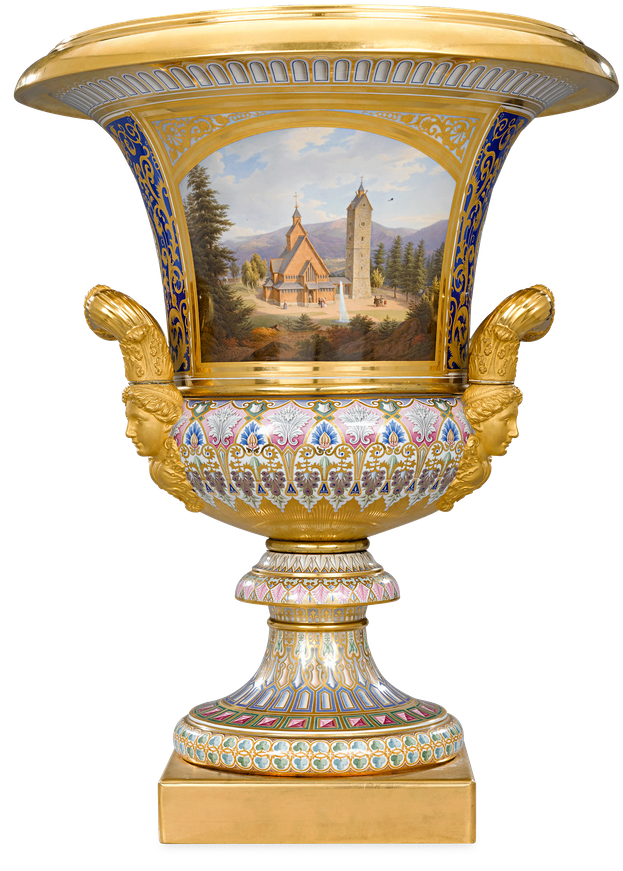 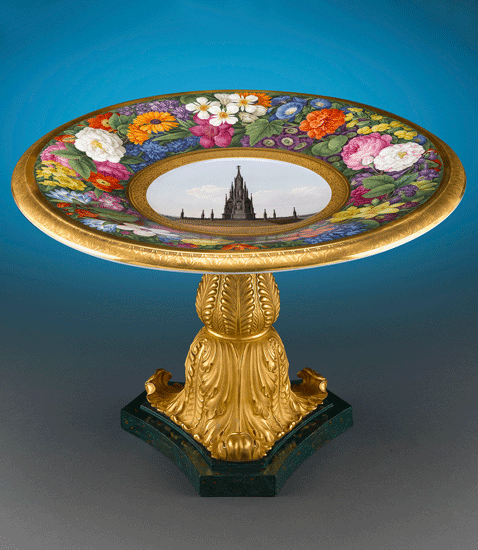 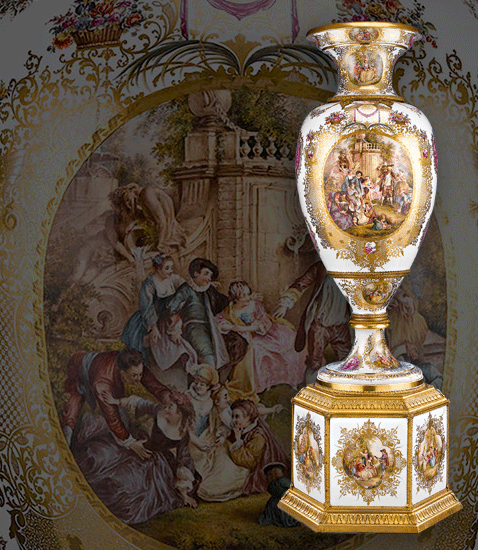 Standing over six feet tall and crafted entirely of porcelain with bronze mounts, this vase and plinth are enveloped in meticulously hand-painted scenes of 18th-century figures at leisure. Various scenes of...

This porcelain tazza was created for Pope Pius VII by the special order of King Friedrich Wilhelm III as a
symbol of peace and friendship. After the successful Concordat of 1821 and the Congress of Verona...

In this stunning porcelain brûle parfum by renowned French ceramicist Jacob Petit, a Greco-Roman brazier is re-imagined in dramatic Rococo form. This exceptional objet d’art is as practical as it is attractive - it was once... 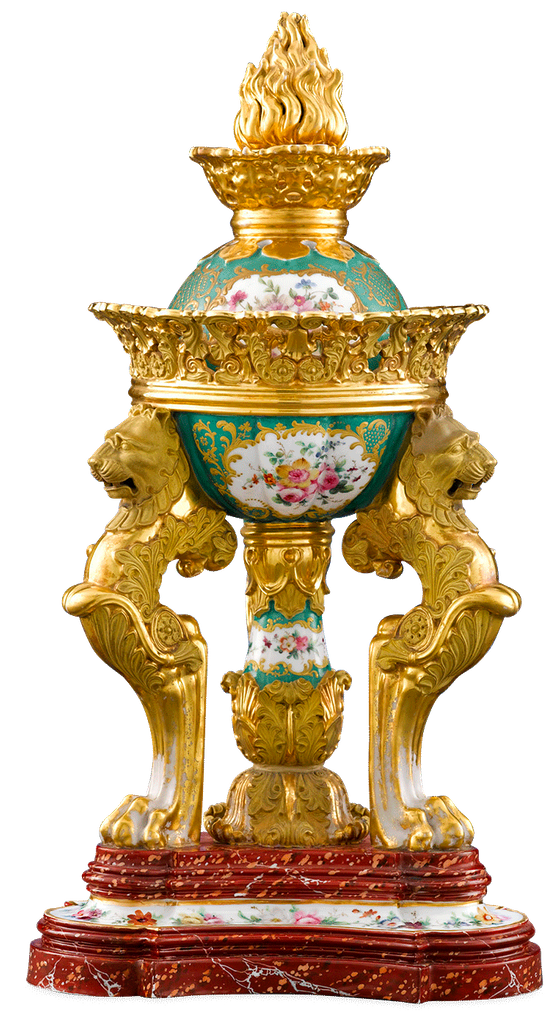 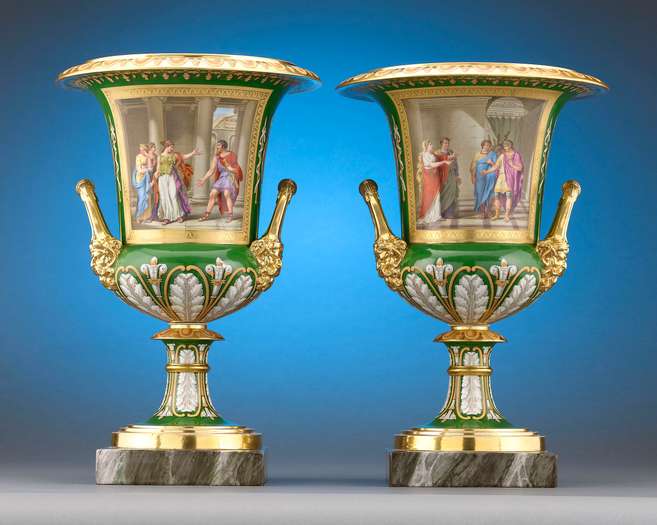