A statesman for whom painting became a refuge, Winston Churchill created hundreds of works, some of which have sold at elevated prices in recent years. 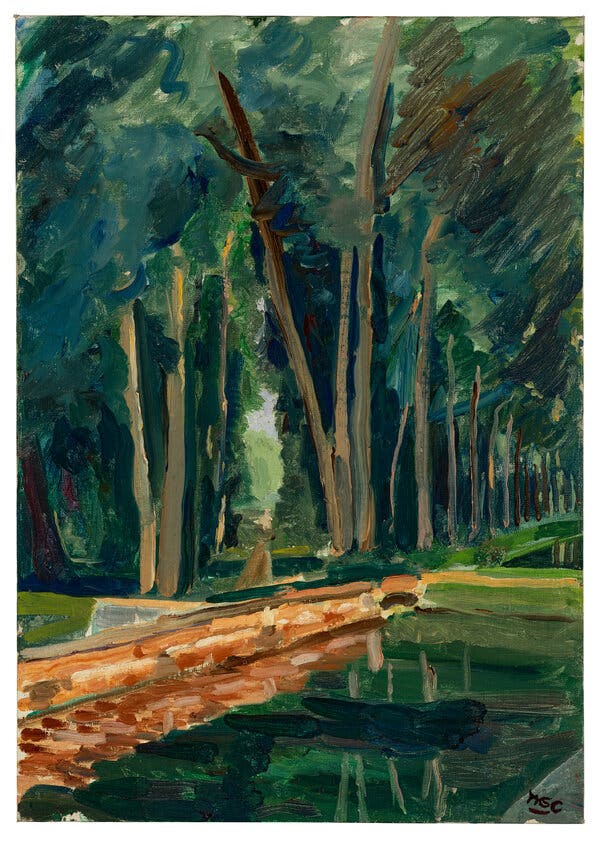 “The Canal at St-Georges-Motel,” a painting by Winston Churchill, was sold last month at Christie’s for $376,000, a price that experts say is evidence of expanding interest in his work. Churchill Heritage Ltd., via Christie's

Winston Churchill, whose fiery resolve and puckish impudence led many to embrace him as an inspiring, authentic, if imperfect, leader, never set out to become an accomplished artist. He only began painting as a respite from depression when, at age 40 in 1915, he resigned as the civilian head of Britain’s Royal Navy during World War I.

Churchill sits in a chair with a hat on and a cigar in his mouth as he paints, his arm extended toward the canvas and holding a brush. Though the count is not exact, Churchill is thought to have created more than 500 paintings. Credit...Getty Images

He had advocated that the Allied navies open what turned out to be a disastrous front in the Dardanelles strait.

“Painting came to my rescue in a most trying time,” he later wrote.

But perseverance, which served Churchill well in other settings, also led him to become a reliable, productive performer with a brush who created more than 500 works. They are prized today, perhaps more for their authorship than their aesthetics, but they are nonetheless adept, often colorful, evocations of the world he witnessed, and are seeing a recent uptick in interest and prices, according to some dealers, auction houses and art historians.

Though the count is not exact, Churchill is thought to have created more than 500 paintings. Getty Images
“A whole generation has discovered him,” said Timothy Riley, director and chief curator at America’s National Churchill Museum at Westminster College in Fulton, Mo.

Three Churchills sold at auction last month, for prices that ranged from $376,000 to $630,000. Two were paintings that Churchill gave to Anthony Eden, who succeeded him as Britain’s prime minister in 1955 — “Still Life, Silver at Chartwell” and “The Canal at St-Georges-Motel” (circa 1930) — and were sold by Eden heirs at Christie’s London.

Last year, a new auction record was set for a work by Churchill when “Tower of the Koutoubia Mosque” (1943), which depicts a view of Marrakesh, was sold at Christie’s in London for $11.5 million to a Belgian collector. The collector also bought two other works by Churchill at that same sale: “Scene at Marrakesh” (1935) for $2.6 million, and “St. Paul’s Churchyard” (1927), for $1.5 million.

“Tower of the Koutoubia Mosque” had been owned by Angelina Jolie, the actress and filmmaker, who received it as a gift from her husband, Brad Pitt, before their breakup, according to Bill Rau, a New Orleans art and antiques dealer. He said he has sold many Churchills, including that work to Pitt. (The previous high price for a Churchill painting at auction had been the $2.7 million paid in 2014 for “The Goldfish Pool at Chartwell” (1932), which is set at Churchill’s former estate in southeastern England.)

Churchill gave the Koutoubia Mosque painting, believed to be the only one he made during World War II, to President Franklin D. Roosevelt as a gift. He created it after the Casablanca Conference, where they decided to pursue the “unconditional surrender” of the Axis powers. After their meeting, Churchill and Roosevelt watched the sunset over Marrakesh and the Atlas Mountains together, and Churchill later painted the scene.

Last year, a painting that Churchill gave Aristotle Onassis, “The Moat, Breccles,” a 1921 landscape, was sold by Onassis’s heirs for $1.85 million at a Phillips auction in New York. A spokesman for Phillips said Churchill gave Onassis the painting in 1961 to mark their friendship and that the work had hung on Onassis’s yacht alongside works by El Greco, Gauguin and Pissarro.

According to “Sir Winston Churchill: His Life and His Paintings,” by David Coombs with Minnie Churchill, another gift of a painting in the 1950s went to Arthur Hays Sulzberger, then-publisher of The New York Times, to recognize his 20th anniversary in that role. Churchill, who served as Britain’s prime minister from 1940 to 1945 and again from 1951 to 1955, had never planned to sell what he called his “little daubs.” He wrote early in his painting career to his aunt, Leonie Leslie, and said, “They’re too bad to sell and too dear for me to give.” But he eventually gave away at least 100 works to family, friends, colleagues, employees and foreign dignitaries.

Another 100 or so Churchill paintings are held today at Chartwell, the 80-acre estate in Kent in southeastern England that Churchill bought in 1922 and lived at until shortly before he died in 1965. The lush landscape of his property became a source of inspiration and Churchill built the garden walls himself and was pleased to be recognized as an honorary member of the bricklayers’ union. The estate is now preserved as a historic property by Britain’s National Trust.

Most of Churchill’s paintings are landscapes or still lifes — of roses, tulips, magnolias, lilies, orchids and daffodils, fruits and wine bottles. A still life that included bottles of whiskey and brandy sold for $1.3 million in 2020. He also made portraits, mainly of his family, but preferred landscapes. “A tree doesn’t complain that I haven’t done it justice,” he once said.

Paul Rafferty, an artist and author of “Winston Churchill: Paintings on the French Riviera,” said in an interview that more than 130 of Churchill’s paintings were made there. But he also painted scenes in Egypt, Italy and Greece; depicted the fjords of Scandinavia and the canals of Rotterdam; and was drawn to cathedrals and ruins as subjects.

Just how many works he created is something of an approximation, Allen Packwood, director of the Churchill Archives Center, said. “Churchill did not maintain a catalog as he was going along and there is a possibility that there could be more paintings,” he said.

He first began to paint with watercolors and started during a weekend away at a farm in Surrey with his wife, Clementine. After watching his sister-in-law Gwendoline sketch with watercolors, he borrowed some materials and began painting, later turning to oils, which he preferred. David Cannadine, a Princeton University professor of history, said in a book he edited, “Churchill: the Statesman as Artist,” that painting was a successful strategy that Churchill used to keep depression at bay.

“If it weren’t for painting, I couldn’t live,” Churchill once told his friend, John Rothenstein, who was then director of the Tate Gallery. “I couldn’t bear the strain of things.”

Cannadine wrote that Churchill was “at best indifferent, at worst hostile, to modern abstract art” by Chagall and Picasso. He was captivated instead by Manet, Monet, Cézanne and Matisse, whose work, he wrote in his book “Painting as a Pastime,” “is distinct with gaiety, and floats in sparkling air.”

In the 1920s, Churchill sent five paintings to an amateur show in Paris under a pseudonym — Charles Morin — because he didn’t want to capitalize on his name. Four sold for modest prices.

He also used a pseudonym — David Winter — to enter a competition for amateur painters in London in 1926. He won first prize from the judges: Kenneth Clark, who later became director of London’s National Gallery; Oswald Birley, a prominent portrait painter; and Joseph Duveen, the most famous art dealer at the time.

In 1949, Churchill sold Joyce Hall, the founder of Hallmark Cards, the rights to reproduce five Churchill paintings that were used to illustrate Christmas cards. Hall later arranged a traveling show of 35 Churchill paintings that opened at the Nelson-Atkins Museum in Kansas City, Mo., in 1958. Other stops on the exhibition’s tour included the Detroit Institute of Arts, the Metropolitan Museum of Art, the Art Gallery of Ontario and the Smithsonian.

But not all museums welcomed such a show.

According to the website of the International Churchill Society: “The assistant director of the Carnegie Institute in Pittsburgh declined to exhibit Churchill’s paintings by referring to one of his other ‘hobbies’: ‘I understand that Churchill is a terrific bricklayer, too, but nobody is exhibiting bricks this season.’

Churchill paintings have been displayed in galleries and exhibitions in Europe, Canada, Australia, Japan and the United States, said Merry L. Alberigi, a former director of the International Churchill Society. Three museums — the Tate Gallery and the Royal Academy in London, and the Dallas Museum of Fine Arts — have Churchill works in their collections.

“Most critics,” Alberigi wrote in the society’s publication, “shared the opinion that, while Churchill did not rank among the great master artists, his work had distinct merit.”

One Churchill show, which opened in 1983 at the National Academy of Design in New York, was curated by two of his granddaughters, Edwina and Celia Sandys.

In an interview in her studio at the National Arts Club in New York, Edwina Sandys, an artist herself, recalled watching her grandfather paint.

“He was very quiet, and all the grandchildren kept quiet,” she said. “Sometimes we would follow him into the garden and he would feed the goldfish with worms. Then we’d walk to the lake, and he’d feed the swans.

“I once showed him a Christmas card I had made, and he gave me some advice. He said, ‘You’ve got to be bold. You’ve got to make it striking.’”

Sandys said that dinners at Chartwell were among her favorite times with her grandfather.

“The talk might be about feeding the goldfish or the nesting habits of black swans and followed by a discussion with Field Marshal Montgomery about the battle of El Alamein in North Africa in World War II, or with another famous guest.

“And when grandfather finished his brandy and cigar, he would recite some of ‘Lays of Ancient Rome,’ the poems by Thomas Macaulay about the heroic periods in early Roman history, and tears came to his eyes.”

She paused and continued: “Throughout his life he loved bright colors — blues, greens, reds, yellows. He discussed different colors in ‘Painting as a Pastime.’”

Churchill wrote in the book: “I cannot pretend to feel impartial about the colors. I rejoice with the brilliant ones and am genuinely sorry for the poor browns. When I get to heaven, I mean to spend a considerable portion of my first million years in painting, and so get to the bottom of the subject.”