A Harry Winston Necklace With a Giant 38-Carat Diamond Could Be Yours for $7.5 Million 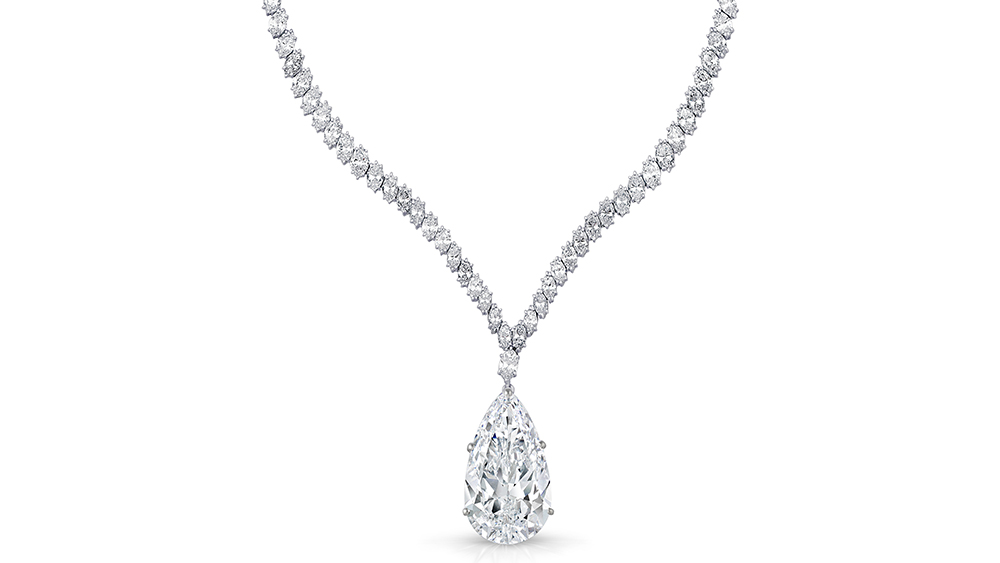 If you’re in search of a giant Golconda diamond, one just went up for sale. And it happens to be attached to a spectacular piece of high jewelry.

Designed by Jacques Timey for Harry Winston, the rare necklace in question was once owned by Greek businesswoman and late heiress Christina Onassis. It was a gift from her father Aristotle Onassis, husband to former first lady Jacqueline Kennedy Onassis, who Winston also made jewelry for. Provenance aside, the necklace features one incredible rock.

Timey sourced a mesmerizing 38-carat Golconda diamond for the centerpiece. For the unversed, the legendary Golconda mines in India produced diamonds for nearly 2,000 years and are responsible for some of the world’s best gems. The coveted stones possess a level of clarity, purity and transparency unmatched by most others. As such, they are often referred to as the “ultimate diamonds.”

This particular pear-shaped beauty is certified by the Gemological Institute of America as being both D color and Type IIa, meaning it lacks any trace of nitrogen. The natural element is known for giving diamonds their color, but in this case, the Golconda diamond appears entirely colorless and reportedly two shades whiter than the whitest D-color diamond. Set in platinum and 18-karat white gold, the massive jewel is accompanied by roughly 25 carats of additional diamonds of G color and VS clarity.

Christina was well-known for her extravagant collection of jewelry that included designs from Van Cleef & Arpels, Cartier and Chaumet. In fact, a 2008 Christie’s auction in London offered 230 exceptional rings, bracelets, necklaces and pearls the heiress collected from 1950 to 1987. Despite the sale’s original $9.5 million estimate, it brought in a whopping $13.3 million.

Winston, a.k.a. the King of Diamonds, founded his business in 1932 and was the go-to jeweler for well-heeled socialites. In addition to the heiress and her mother Jackie O, he designed statement pieces for celebrities such as Marilyn Monroe and Elizabeth Taylor, as well as royalty like the Duke and Duchess of Windsor.

To find a stone of this quality and size is rare, but one set in a Harry Winston necklace is once-in-a-lifetime stuff. The necklace is currently up for sale at M.S. Rau for $7.5 million.

The Power of Post-War Art Read more
Previous
Next